Institute for Nutrition and Food Safety 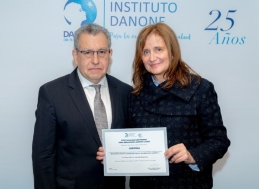 The lecturer Rosa Maria Lamuela Raventós, from the Faculty of Pharmacy and Food Science of the UB, has been awarded the Danone Institute Prize to the Scientific Career Dr. Carles Martí Henneberg 2018, an award to honor the contribution to the field of food, nutrition and health in Spain. This award was given on Wednesday, January 30, in the commemorative ceremony for the 25th anniversary of Danone Institut, presided by Luis A. Moreno Azar, professor at the University of Zaragoza and president of the Danone Institute, and Ana Canals, advisory member of the Executive Directorate of the Spanish Agency for Consumer Affairs, Food Safety and Nutrition (AESAN). More